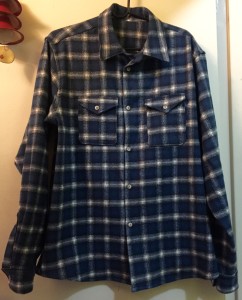 And it wasn’t really that hard at all.

While this is not the lovely Pendleton flannel I originally bought to make this happen (it’s still hanging out in the stash, though, so it’ll happen soon), it is truly a dream realized. This soft cotton version (in an exquisite yarn-dyed cotton flannel from Robert Kaufman that I got at the store) has become the Dude’s FAVORITE SHIRT.

That is such a big deal, you guys.

I have two more colors of the cotton flannel on hand as well as the Pendleton, so there will definitely be more Negronis in the future of le blog. Changes to make for the next ones? Use a different shape for the patch pockets, and cut them and the back yoke pieces on the bias since I had enough fabric to do it. I didn’t interface any of the pieces, and I think if you’re using anything flannel-weight or heavier it’s totally unnecessary–the pieces stand up perfectly well on their own, and flat-felling the seams over some of the quadruple-thickness areas would have been made even more interesting with another layer of stuff. I love the clean, matched-plaid look of the fronts with facings instead of plackets, but it might be cool to do a version with on-the-bias plackets too. As much as I hate to admit it (because it made stitching the sleeve seams A THING), flat-felling is totally the way to go on this shirt.

My biggest mistake? NOT TRACING THE DAMN PATTERN PIECES ONTO SWEDISH PAPER. I tore the crap out of the tissue trying to transfer my markings, so much so that I may have to buy another one. And since the plan is to make at least three more of these, I definitely need the pattern to stand up to heavy use. Sigh. But all told the cutting only took about 3 hours, and I had a whole half a yard left over from the 3 yds I’d bought for it. Sewing it up only took about a day, and really was a piece of cake. Either I’d grossly overestimated the intensity of making a man’s shirt, or my skills really are improving.