Several years ago, when cleaning out her Florida condo and consolidating her sewing machine armada, my Nanny Jo gave me a serger.

Sergers, for those of you not intimately familiar with the sewing world and its many strange and terrible nuances, are used for overlocking. Overlocking is a very useful type of stitch for finishing raw edges of fabric so they don’t ravel; and, because it has a lot of stretch, for sewing with knit fabrics. That’s what sergers do. They overlock. Sounds pretty simple, yes?

Yeah. Not so much.

In order to overlock, sergers use UP TO FOUR different threads. And some of those threads run through the machine multiple times. All this basically means that threading a serger is a feat so terrible, so complicated, that most people just recommend tying knots in your thread and pulling it through when you need to change threads. This from a community of people who, as a rule, don’t shy away from fiddly and time-consuming things.

So as one might reasonably assume, I was pretty intimidated by my inherited serger. It came to me with a VHS explaining its use, and a manual that looked like the blueprint for the Death Star. So I let it sit, in a bag, while I waited for courage and/or desperation to strike me and force me to learn its secrets.

While working my first shift with Beth, she mentioned that she and Pia were planning to have a “serger party” to learn and use her new Bernina serger. I froze, gaped, and probably drooled a little before asking if it was alright to invite myself along. I would happily bring my own serger to round out the party if only they would teach me its mysterious workings. So the following Tuesday, I headed over to Beth’s with my Speedylock and pattern pieces for Colette’s Moneta in tow. And what I discovered was quite shocking. 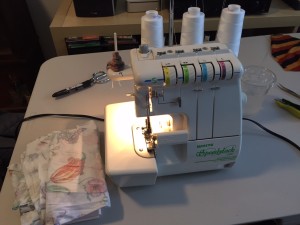 The serger isn’t really that hard.

Yeah, there are a lot of threads. My first attempt to rethread I did the knot-and-pull method (Nanny Jo had thoughtfully left thread tails in it for just that purpose) and it was a bit fiddly. I was missing the tweezers that came with the machine originally, and do make most of the threading more simple, but that was the worst part. At one point the thread jumped off one of the loopers and I had to really rethread from scratch, but all the guides and holes had little color-coded dots and the manual was actually quite clear. The hardest part was adjusting the tension so the overlock stitch formed properly, but as long as I had plenty of jersey scraps to test on, I was fine. In one afternoon of serger-party fun, I had pieced together every seam that could be serged on my Moneta. After picking up a twin needle at the store and some time with Evelyn at home, I was all done. 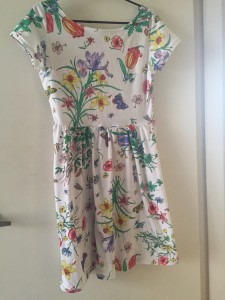 Honestly, it’s a pretty sloppy job (just look at those waistline gathers, UGH!) and it looks pretty droopy and unimpressive on the hanger, but it fits! And it’s comfy! And I SERGED IT!

I did learn some truths about serging on the whole, that is pivoting isn’t really a thing that they do and that starting in the middle of a seam (eg attaching the pockets) isn’t that easy either, but I will get better. And the biggest takeaway of the lesson is simple: that I CAN SERGE. I can overlock raw edges of seam allowances now (a big improvement over traditional finishes for heavier fabrics), and I can sew knits much more quickly and securely. I have a new tool in my arsenal, and you know what that means?

Well, that she needs a name, obviously. I’m thinking Veronica.