As he is wont to do, because he is the best friend I ever had and knows me so very well, he brought me back souvenirs in the form of textiles. This particular trip yielded two large woven wool panels, a bag of clay beads, and some alpaca yarn.

I have since discovered that I’m too sensitive to the alpaca to wear it (a sad fact discovered two sweaters too late), but I wanted to do something special with the other gifts.

The woven panels were thick and pretty large, both about 50″ square. I didn’t want to cut them, obviously, and bags felt like a cop-out. So instead, I quilted them. Due to the loft of the batting and the thickness of the wool, I had to hand-tie and -bind them. Which means I’ve only finished one to date: 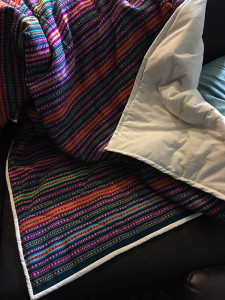 The other is sitting patiently in my basket waiting for my fingers to recover.

It comes as no real surprise to anyone that this winter was COLD. We spent a couple weekends with friends in West Virginia before the weather really warmed, and the chilly tile floor of their basement guest room inspired me to make a pair of slippers. I’d been intrigued by Tiny Owl’s Moonkoosa pattern for some time in that “they’re so ugly they’re cute” kind of way, and I thought that they’d look better (and be super warm) in a natural-colored wool with some bead detailing. So I went for it. 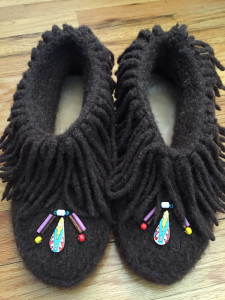 This was my first real felted project, and it was hard work. I tried to felt them in our washers downstairs, but the result was pretty feeble. I brought them back upstairs and alternated pouring boiling water from the kettle over them and rubbing vigorously (rubber gloves on, of course) and then shocking them in cold water from the tap and rubbing more. This seemed to be pretty effective, and I managed to get them down to about a size 9. The other big benefit to doing it by hand is that the fringe didn’t get super-matted the way some of the machine-felted pairs on Ravelry did. I picked out a pattern I liked with a tiny portion of the beads from the bag Neimah gifted me, and stitched them on. Other makers on Ravelry had bought Uggs insoles to slip inside, and while the more judgmental part of me snorted at that, the reasonable part of me is very glad I did. They lend the slippers more structure, plus they’re super squishy and warm. Just in time for the weather to turn, naturally! 🙂

I’m really fond of both of these projects, both for their inherent utility as well as for the beautiful country and Quechua culture they represent. I think those people would approve of the labor and love that went into my handiwork…though definitely not their authenticity!