Okay, lesson officially learned. DOWNLOADABLE PATTERNS: NOT EVEN ONCE. 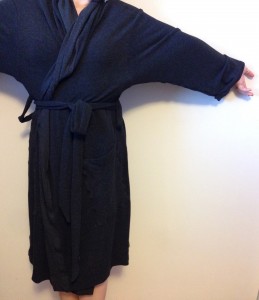 Especially not from the big three. Oy vey. Even before the horrendous, soul-sucking jigsaw puzzle that is assembling your pattern pieces from about a jillion pieces of 8.5×11″ paper, the PrintSew user experience is NOT one to write home about. Unless you really like to convey a sense of desperation and rage to the people at home, I guess.

Anywho, I downloaded and put together the pattern pieces (10! Oof!) for the bathrobe portion of this jammies set, and cut the size small (it’s a unisex pattern). The pattern is drafted for a woven flannel/fleece-type fabric, but because I am a wack job, I decided to stitch it up in a super-soft and cuddly rayon doubleknit.

Surprisingly, this didn’t wind up being too much of a PITA except for attaching the collar facing portions. The weird angles at which they were cut made no sense, so I just stitched them as best I could and got a sort of weird, ripply, collar-thing.

But the nice part? I picked this project to be my veritable “intro to knits” because I didn’t really care if it came out looking like a beauty queen, so long as it was wearable. And you know what? It is. It’s precisely what I wanted… a big, cozy blanket of a garment that covers all the pertinent bits when I’m going from shower to bedroom. It has pockets, and I put in a locker loop (though since it’s also rayon doubleknit, it’s usefulness is somewhat truncated), and the sleeves and bottom hem hit me exactly where I want them to. As much as it looks like a big sloppy mess, I am happy with it. And it also taught me that sewing seams with knits is not that scary. Which was vital for the second project I managed to turn out this past weekend… but more on that tomorrow.