Savvy readers will remember last summer I made a pair of lineny pants.

Extremely savvy readers may remember this direct quote from the entry introducing those lineny pants:

this fabric is woven SO LOOSELY. I not only got the aforementioned holes in the inseam after two wearings, but the reinforced crotch seam started to fray on the butt. WTF Robert Kaufman? I ran through Evelyn’s darning program (not very neatly, I may add) with a little of my extra stuck inside, and so far it seems to be holding… but others using this fabric, be advised that SERGING IS NOT YOUR FRAND.

Sadly, that “seems to be holding” thing did not last long. The pants made it through a trip to Puerto Rico, but upon putting them on our second day in Taiwan (which reminds me, I have trips I still haven’t shown you yet holy crap I’m the worst blogger), I noticed the inseams were literally threadbare. I tried not to cry/throw a fit, and literally ripped them up for rags right that second, and left them there with our hostess.

But while they lasted, I loved them dearly! So let’s try this again! Who cares what Albert Einstein says about anything, amirite? 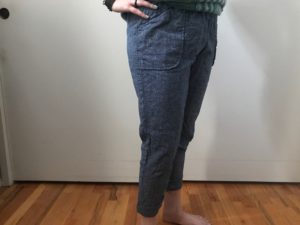 Moji, take 2. In another Robert Kaufman linen/cotton blend, but this time it’s the Essex Yarn-Dyed, which feels quite a bit more substantial than the chambray I used last time.

THIS TIME, I added 1/4″ to the seat curve to give a little more ease for the rear, and added 1/4″ front and back to the inseams at the top of the thigh, tapering it out as it got close to the knee. I serged all the raw edges that wouldn’t be enclosed, and then mock flat-felled ALL THE SEAMS except the outer legs, which I did mock-fell to just below the pockets and then added a little bar tack for stability. Clearly, I learned a little from my jeans-making (on which a post is coming soon, I promise).

What I did not do, however, was prewash my fabric.

I had a lot of reasons. “Linen doesn’t really shrink,” I thought. “And if I wash it, it will wrinkle like crazy and I will have to iron for a year before it’s ready to cut, and that’s so much time and effort I’d really rather not.”

Friends, I’m here to tell you: if any of the Seven Deadly can be called to account, it’s SLOTH that goeth before a fall. So if these pants seem to look a little, well, snug, for all the space I supposedly added to my pattern pieces, well. 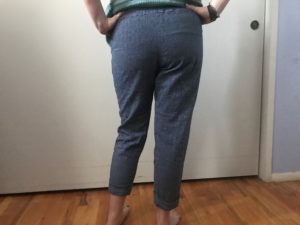 In the meantime, I’m going to wear these. I’m going to crouch and bend and attempt to ride my bike, and if they burst from my body in rags like I’m She-Hulk on a bender then so be it. I will call it a day, and declare that these pants are not meant to be, and never plague you with another iteration.

I know the end of a franchise when I see it.