Sock knitting for the year continues apace. I finished another random pair that I’m trying to get a pattern together for; I call them Star Stuff. I sadly can’t show them to you, because I’m trying to get the pattern published!

The Great Speckled Yarn Trend of 2017™ rages on unabated, and I have not been immune. I picked up a lovely skein of Primrose Yarn Co. Sophia and decided to try my hand at a stitch pattern that would keep the socks from being too boring while also still showing up reasonably well in the wildness that is speckled yarn. Aside from knitting the second sock quite a bit shorter than its mate (d’oh!), I thought I did a decent job with them. I’ve got some folks testing the pattern to catch my errors, and with any luck you might see it in next spring’s issue of Pom Pom Quarterly!

And then of course there are Husband Socks. 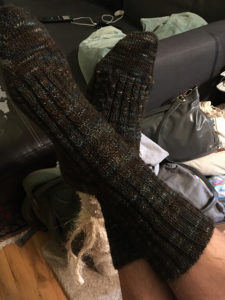 Somehow we’ve gotten on a roll with Birthday Socks and Christmas Flannel Shirts, and I’m really into it. So these are the Woodcutter Socks by Rachel Coopey from an old issue of Enchanted Knits, knit up in some warm woolly sock from The Kangaroo Dyer that, oddly enough, Husband himself picked out for me when he was shooting a film in the wilds of Massachusetts that had him near the Mecca of knitters known as WEBS.

While I’m technically behind on the Self-Imposed Sock Club for 2017 (making up patterns always seems to take longer than I think it will), I feel like I’ve still churned out a fair number of socks for the year, and hopefully will have 3 more pairs to show you when all is said and done.

But in the meantime I need to get sewing. SO MANY THINGS IN THE QUEUE.