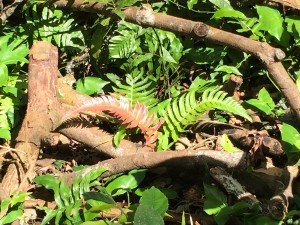 Two weeks ago, we took off for an adventure in Costa Rica. After ten days spent visiting a different national park every day, driving on roads paved (if they were at all) in gravel and sand, and meeting people who personified the concept of pura vida, here is what I learned:

1) Rough roads make you appreciate what lies at the end of them. 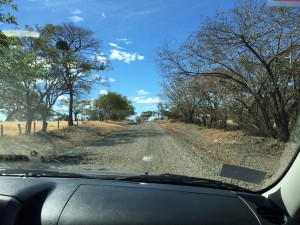 As I mentioned above, there were very few roads that fit our American definition of “paved.” In fact, we at one point got lost on a road on the Nicoya peninsula that led us up and over a mountain that was barely more than a dirt path. But all that wildness makes you appreciate the tenacity of the people that live in this country, and the fact that they arrange their priorities differently: preservation before comfort, peace before convenience.

2) When you live on a mountain in a rainforest, you see rainbows every day. 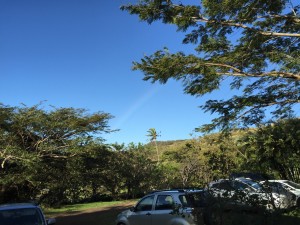 We joked at one point that Costa Rica had a daily quota of four rainbows. We weren’t far wrong.

3) “Rainforest” doesn’t necessarily mean what you think it does. 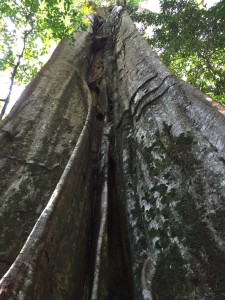 I went in to this trip thinking “rainforest” was going to mean lots of hot, muggy hiking through thick plant life and huge trees. Thick plant life (off the trails, for the most part) and huge trees, check. Hot and muggy? Not so much. In fact, the forests were mostly cool and pleasant. It did rain on us through most of our hike at Volcàn Tenorio though, leading to…

4) Costa Rica has some of the most epic mud I’ve ever seen. 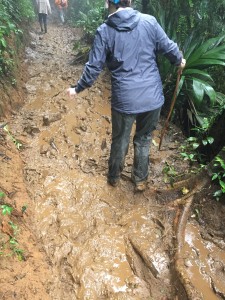 It ate my shoe at one point. I got it back. Though not before stepping squarely into the muck in only my sock. Luckily there was a stream we tromped through on the return that cleaned most of it off. In general, proper footwear is extremely important, to wit: 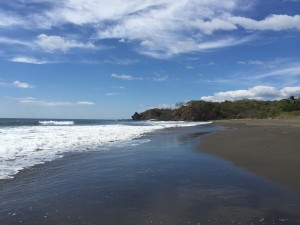 We ran down to the water of this beautiful beach on a bit of a whim, so we shed our hiking shoes and socks to do it. Big mistake. The sand was so hot it blistered our feet. Luckily Neimah’s parents were on hand to retrieve our shoes for us so we didn’t have to compound the damage by running through the gauntlet of fiery pain back to the car. 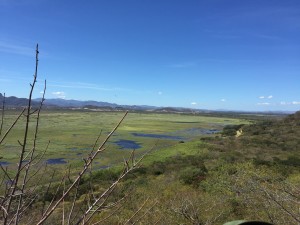 We spent most of our trip in the province of Guanacaste, which is actually the driest in Costa Rica. As a result, we got to see not only the tropical rainforests, but flat, almost desert-like grasslands (where we saw a ton of lizards and two snakes), and a huge expanse of wetlands along the Rio Tempisque (seen above). The wetlands were home to innumerable birds (including a rare Roseate Spoonbill and a pair of Scarlet Macaws!), caimans, and one massive American Crocodile I saw floating log-like through the river. You’ll have to take my word that we saw them though, because…

7) It is notoriously difficult to photograph the wildlife. 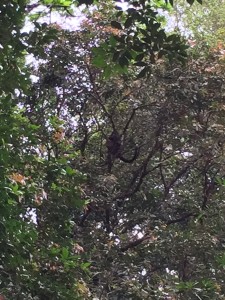 That darker blotch in the middle of the tree in this photo is, in fact, a howler monkey. We saw tons of howlers, as well as the other three species of monkey indigenous to Costa Rica; plus coati, agouti, squirrels, more than 60 species of birds including two different mot-mots and the jabiru (Costa Rica’s biggest bird, who looks like a stork crossed with a black vulture), a tarantula, snakes, basilisks, and SO MANY IGUANA… 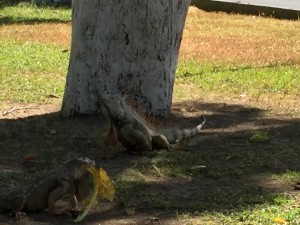 Who, as de facto pets in the town squares, were the only creatures easy to photograph. We tried the iPhone-held-to-the-binocular-trick once to snap a photo of a Bare-Throated Tiger Heron, with pretty poor results. We might have had better luck with a better camera, or if we’d just kept our phones handy all the time. But honestly, it was nicer just to experience their presence in the moment and then review them in our books back at the posada in the evenings. Costa Rica is overflowing with amazing creatures, and we were lucky to catch a lot of them in the wild. We did also visit a herpetarium and frog pond in Monteverde where we got to see some of the shyer snakes and amphibians up close. 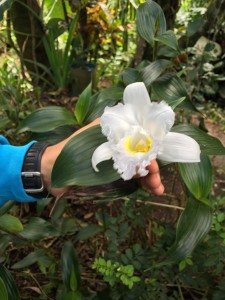 After lunch in Monteverde, we took a guided tour of an orchid garden. Neimah’s dad is really into horticulture, and loves growing orchids in particular. Even so, I think even he learned a ton. Orchids are epiphytes, which means they need something to root themselves to, but they are not (as I had previously thought) parasitic. They also produce no nectar, so their entire evolutionary objective is to trick the creatures that pollinate them (bees, flies, and mosquitoes, mostly) into doing the job. One orchid that courts mosquitoes has a chemical reaction with water that smells like wet dog. One that likes bees has a “spring-loaded” labial petal that trampolines the bee into its reproductive column when it lands. The flowers range in size from only visible with a magnifying glass to as big as the single-day bloom above. And most interestingly, the orchids you buy in the states? Almost all lab-grown hybrids.

9) Where there are mountains, there are waterfalls. 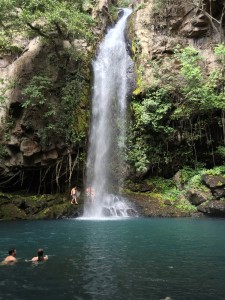 And they were EVERYWHERE, from this one at the end of our first day’s hike in Rincon de la Vieja, to the local beach provided by Llanos del Cortes behind our second lodging, to the 60-foot monster at Rio Celeste… 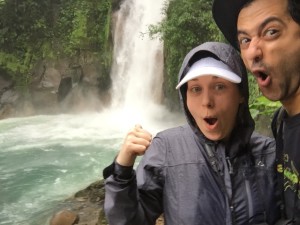 There were a lot of falls. Most of them we got to swim in. One of them we got to climb behind and stand in the smaller streams that had been so warmed by trickling over sun-baked rock that it was like taking a hot shower. And the other side of the waterfall coin…

10) Where there are volcanoes, there are amazing colors.

The many interesting chemicals the volcanic rivers carry along do interesting things to the color of the water. You’ll notice the lovely crystalline blue from the sulfur in the first waterfall picture above. The rivers at Miravalles where we went to the hot springs were rusty red from the iron content. And this picture shows the mingling of two different rivers at Tenorio, with a white band of aluminum silicate dividing the two.

In addition to these more physical lessons, the pace of life in Costa Rica and the attitudes of its people had a lot to teach as well, most of which was more personal and requires a little more reflection on my part as I journey through this crossroads of my life. Perhaps I will examine some of those themes here as I incorporate them, or perhaps not. But I will say that the trip was transformative, and I highly recommend a visit to this beautiful country for anyone with a spirit of adventure. Neimah noted at one point that it felt like the Wild West, and in a way, it did. Like that American frontier, the natural landscape has not been subdued by human influence, and there is a wealth of possibility there.