April 30 to September 30. That’s an absurd amount of time to try and cover in one entry, so I really won’t even attempt it. Here are the big things:

As you might have also expected, I made a lot of things. I do that sometimes. There was one awfully big thing that I made, that I will give its own post. But in the meantime, I am still alive, and here is a little thing I just finished to replace my lost-and-gone-forever Milkweed: 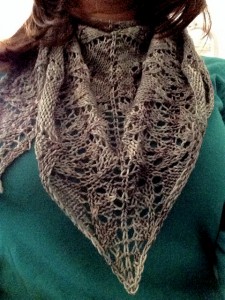 It’s Parisienne, by Katie White, in a lovely squishy merino-cashmere yarn from Sundara in colorway Graphite Falls. It’s as close as I could get, huh?