Yes, I am late. I marked this sweater as finished on April 11, 2012, and please note the date of this post. But hey, at least it’s here! And I have yet to cast on the next Little Red sweater, so I guess it’s still okay. Anyways, onwards! 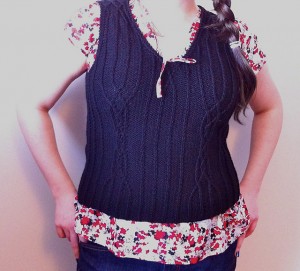 Ladies and gentles, I present Angostura. I joined a knit-along for it on Ravelry rather late in the game (once I’d finished the back), but it was nice, after getting there, to discover just how many other people were having the devil’s own time getting row gauge on this bad boy. And, since all the shaping is done within the cables, row gauge is sort of important to this project. Le sigh. I did my best with pen and paper to make sure the math would work, and overall, I’m pleased with the result. 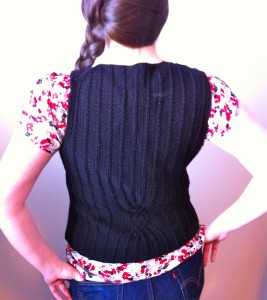 The pattern instructed you to knit 4 inches of plain slipped rib before starting the back cable panel, but since I am (as has been noted in past posts) a rather short-waisted lady, I only did about 2 inches. I knit the cable panel as written, and then seriously cut back the plain rib rows knit before starting the armscye shaping. The back was finished with no major issues.

On to the front. I did the same 2-inch mod before starting the front cables, and there was my first mistake. I wanted the cable to   “finish” right below my bust, and as you can see in the first photo, it’s just a touch higher than that. Second mistake: I blithely knit the end of the cable and the beginning of the neck divide as they were written, without taking into consideration where that would put my armscye shaping in relation to the back that I’d already finished. Once I did get it into my head that I ought to compare the two, I found the front was, shall we say, freakishly long. I ripped back the half of a right front I’d knit, back to the front cables, and tried again, keeping meticulous notes about my rate of decrease so I could ensure both sides of the neckline would match. Silly row gauge.

I finished the thing without any further trials. It only used about six of the seven balls of Wool of the Andes I had left from the commissioned Weasley sweater to knit the 38″ bust size (with torso length modifications, of course), so it was a pretty cheap knit. I’m still not a huge fan of this yarn, as it’s rather coarse and itchy, but this is really the only way to wear it: well on the outside of several layers, for warmth. It’s a cute little vest, and a nice piece to have in the wardrobe, but Mr. Boyfriend (who was kind enough to photograph it for me) hit the nail on the head with his commentary: vests are not the most flattering thing on me.

Were I to knit this again, I would obviously amend my front cable placement, but I would also change some of the shaping to double decreases to give what waist I have more definition.

But, in any case, Little Red #2 is done and dusted. Five more designs to go! I’ll try to be a little more “process” for the rest of them, since I think that’s a lot more fun.

Celebrating this beautiful autumn equinox with a d

INTERNET RECOVERY DO YOUR JOB.

Today in “read until words no longer make sense,