Most notably, the colorful, soft, and warm Jackson scarf: 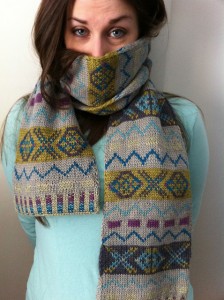 It’s knit up in the absolutely decadent Road to China Light, by The Fiber Company. Savvy readers might notice a bell ringing in their brain pan at its mention, and rightly so. It’s the same yarn from whence the Brontë Mitts (link) arose, and it has fast become a real favorite. The softness of the alpaca and cashmere blend so well with the rich drape of the silk, and everything just has this soft and shimmery halo, and…

Well. You have eyes. Just look how happy I am in that photo, eye-bags and all. 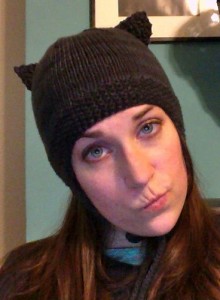 This photo is even more flattering, no? Taken last night after weaving in the last ends during the Giants/49ers game. I knit this up for my boss’s girlfriend, who got me a very thoughtful and apt present for Christmas this year, and for whom I got (until now, that is) nothing. It’s stretchy and sweet, and only took about half the big fat skein of Swan’s Island Worsted I bought for it. This too is a yarn that’s made it onto my short list of “must knit up all the time always” yarns. It’s so soft and squishy and springy, and it comes with the added benefit of being organic. Good stuff.

And lastly, I bring you this. 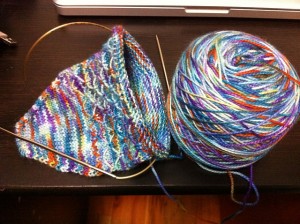 Better late than never, a humble start on January Socks! The pattern is Leyburn (link), in a fabulous colorway of Abstract Sock called Hawthorne, after a particularly hipster-y street in Portland, where this yarn was purchased. I think the long floats do a nice job of breaking up the color speckles and adding some interest. Would you agree?

So my two finished things (and the socks as well, once they’re done) are participating in new nerd games (I know you missed ’em)! Official Nerd Wars doesn’t start up till next month, but BSGFPB has been going strong since November, even though I haven’t. Luckily, it would appear the knitting mojo is back in full swing! Now, to get back to the sewing…