It’s almost Christmas. Did you guys know that?

Obviously, it’s been awhile since last I posted. The neck and shoulder pain I detailed in the previous post has mostly subsided, but I do suffer flare-ups and twinges every now and again. I finished the cashmere mitts for my Nanny Jo: 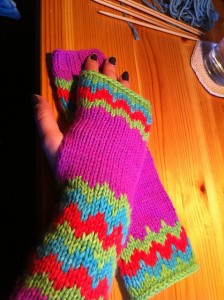 And I love how they turned out. I gifted them to her when Mr. Boyfriend and I went to KY at the beginning of the month, and (of course) didn’t make a single note about their construction before handing them off. But not to worry! I have lots of DayGlo cashmere left with which to make another pair, which I will photograph properly and write up a pattern for. Edit over a year later to say “YAY! Pattern now available for purchase at Ravelry.com!

I also finished the matching hat and glove set I wanted to go with my lace cowl, but I have been rather remiss about getting their picture taken. I’m not sure if I’m going to worry with getting the “pattern” for them up. I’ll probably just attach them to the pattern and take a nice picture, and if anyone on Ravelry begs for the alterations, I’ll hand them over.

Chickadee is technically done, since I’ve been wearing the snot out of it: 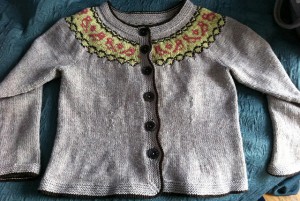 But I still think I need to reinforce the buttonhole side with ribbon (and put a tag in it). The prospect of all that hand-sewing makes me a bit weepy though, so I may just abide with what I have, at least until the holiday is over.

I did mention it’s Christmas, right? I’ve been absolutely wretched about getting the seasonal stuffs out. I just mailed half the cards this morning, and Mr. Boyfriend has been tasked with getting the other half out today. I didn’t send a single one to my Ravelry ladies, despite my best intentions, and I have yet to mail small-people gifts to their intended recipients. Sigh.

And of course, there is knitting. The commissioned Harry Potter sweater is coming right along. I only have one sleeve, the sewing up, and the blocking left to do, which is not much. But the knitting of it is super-boring and hard on my eyes, so I’ve picked up a purely selfish project to temper it with and keep myself sane: 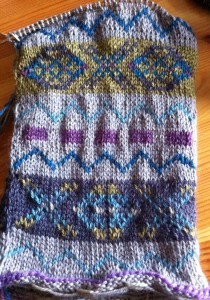 That is about 15% of my new scarf. I bought the pattern on a whim two Sundays ago, and the yarn this past Sunday after a pretty harrowing day. It’s Road to China Light, the same stuff from which I knit the Banana’s Brontë Mitts. It’s absolutely lovely. I just want to rub my face on it every time I pull it out to work, which makes it a nice counterpoint to the slightly rough Peruvian wool I’m using for the HP sweater.

And looking over the pictures I’ve just posted, I notice something.

I think I have colorwork fever, guys. And I don’t care if I ever get better.

Anywho, there’s lots of stuff I should be posting about, but in typical me-fashion, I will either get to it much later, or not at all. In the meantime, I have knitting to do.